The Circular Economy: The Transnational Elites response to the Limits to Growth?

The global market-capitalist economy is a growth machine. Capital accumulation - the endless quest to invest money in order to make more money – is, and always has been, the defining imperative of the system. It cannot stand still. As Marxist Scholar William Robinson puts it capitalism is like a bicycle. If you stop peddling a bicycle you fall over. Likewise if capitalism stops expanding it crashes. Marx, of course, pointed this out long ago more poetically: ‘accumulate accumulate that is Moses and the Prophets’. But, as growing numbers of people are realizing, this ‘growth compulsion’ is obviously a major problem given we face severe limits to growth. The Marxist Geographer David Harvey talks about the ‘contradictions of capital’. This contradiction – between accumulation and ecology – is, I think, the deepest and most fatal for the system.
Read more »
Posted by Johnny Rutherford at 3:46 PM No comments:

Email ThisBlogThis!Share to TwitterShare to FacebookShare to Pinterest
Labels: Limits to Growth 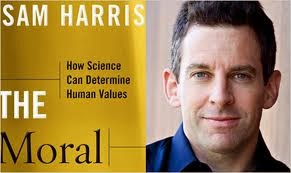 Below is my entrance into a competition created by the 'New Atheist' Sam Harris on his blog site. He asked readers  to submit 1000 words designed to him that his central thesis (see here) in the "Moral" Landscape" is wrong or flawed. It is of course very hard to respond and put my 'subjectivist' case in so few words, but he was offering $10,000 for the winner and $20,000 for anyone who persuaded him, so I thought why not?! For readers who do not have time to read Sam Harris own 'response to critics' he has summarised his core thesis as follows:

Morality and values depend on the existence of conscious minds—and specifically on the fact that such minds can experience various forms of well-being and suffering in this universe. Conscious minds and their states are natural phenomena, of course, fully constrained by the laws of Nature (whatever these turn out to be in the end). Therefore, there must be right and wrong answers to questions of morality and values that potentially fall within the purview of science. On this view, some people and cultures will be right (to a greater or lesser degree), and some will be wrong, with respect
to what they deem important in life.'


Read more »
Posted by Johnny Rutherford at 4:02 AM No comments:


The context:
In the four years since a team of European scientists warned that burning only half of the world’s proven, economically recoverable fossil fuel reserves would push temperatures well beyond the danger level, global emissions have only continued to rise. The Intergovernmental Panel on Climate Change’s recent fifth report says that to have a reasonable chance of keeping global temperature rise below 2 degrees Celsius we must reduce net anthropogenic emissions to zero well before 2050. What follows is a very brief explanation of the reasons why some of us think consumer society is inherently incapable of solving this and other related problems…
Read more »
Posted by Johnny Rutherford at 3:40 AM No comments:

Agenda for an Ecological Commonwealth


U.S Activist Steve Johnson has developed the document below, outlining principles for a new radical global movement. I heartily endorse (please note this is a draft). This document seeks to concisely state some of the most important objectives which a movement for change in our day must embrace if it is to adequately address our ecological, social, and economic crises, in the light of the best current information.

At present, there are few or no movements or organizations which integrate each of the points below into a single agenda. Instead, some of these points have long remained separated out in mutually opposing ingroups, which have developed the habit of stressing certain valid points while dismissing the equally valid points of other groups, resulting in an unbalanced and incomplete agenda. For example, many people who are concerned about population do not recognize how capitalism inevitably drives destructive human impacts and must be replaced rather than merely reformed; meanwhile, Marxists and others, swayed by historical antipathy towards Thomas Malthus, an 18th C. defender of aristocratic interests, fail to think clearly about the role population plays in multiplying destructive human impacts. Thus these points have been traditionally kept apart, rather than integrated, by existing groups and traditions, for purely historical rather than logical reasons.

Read more »
Posted by Johnny Rutherford at 3:42 AM No comments:

Beloved Father, Beloved Son: A conversation about faith between a Bishop and his atheist son